As I mentioned previously I used Manual Settings for my Canon 60D using Magic Lantern, a 3rd party firmware application that offers much greater control over the video settings.

I installed the firmware on 2 SD cards for this project – the following extract re. formatting cards is important as I made the mistake of formatting the cards and removing Magic Lantern. It is also important to wait until the operation has fully completed before ejecting the card otherwise it may cause your Camera to freeze. This happened to me and the only solution was to remove the Cameras Battery – not for the faint hearted as I thought the Camera had become bricked.

News: For those of you waiting for the Canon 7D version, I believe it’s in the development stage and is or will soon be available.

Always format the card from the camera

Since Magic Lantern runs from the card, you may be asking yourself: “what happens if I format it“?

Answer: Magic Lantern first reads all of its required files, including your custom configuration files, and then copies itself back onto the card!

We strongly recommend you to format the card before every important shooting session! This helps maintaining performance when recording files, and prevents the filesystem from becoming fragmented.

A lot of stability and performance issues reported by Magic Lantern users went away after they started to format their cards on a regular basis.

Formatting the card from the camera will make sure your file system is exactly as Canon software and Magic Lantern expect it to be.

Tip: to format the card and remove Magic Lantern, go to the Canon Menu / Format screen and press the shortcut key indicated in brackets, as in the screenshot – on most cameras it’s the [Q] button.

On Monday the 15th October I spent most of the day in the Studio Theatre filming the rehearsals of 3rd Year BA Acting students rehearsing for their production of Shakespeare’s ‘Much Ado About Nothing’ – my thanks to them and their course leader Doug Cockle for allowing me to do this.

Having completed the planned filming using my Canon 60D DSLR I decided it would be a good opportunity to experiment and film the same setup but this time using my iPad 3. Initially I was not overly impressed by the footage taken as I have a general innate dislike for hand held filming of any kind. My own footage although fairly steady still showed some shudder/shake and unintentional vertical and horizontal movement, its really hard to keep a steady hand you tend to drift up and down. However a possible solution presented itself when It was then brought to my attention that the Uni had recently bought in a Movie Rig and Wide/Telephoto Lenses for the iPad.

The Makayama Movie Mount or rig consists of a hard plastic backplate that snaps onto the iPad covering the entire rear panel. It comes with a Lens mounting metal plate with a threaded lens mount situated in front of the iPad Lens, which accepts a small range of specialist lenses. To the base of the rig there is a female 1/4 inch thread which will allow it to be mounted onto a Tripod using the standard screw. It also comes with hotshoe style mounting points for attaching a movie light and shotgun microphone etc.

So with the iPad now mounted on a Tripod I tried each of the lenses beginning with the Wide Angle lens followed by the Telephoto lens. Unfortunately my iPad 3 was not a perfect fit as it’s designed for the iPad 2, but I managed to get a secure fit although I suspect the lens plate may not have been perfectly positioned, which may explain the suspect focusing I obtained from my tests. I was also worried by the lens thread itself as I suspect it would be vulnerable to cross threading as it appeared to be made from a soft metal or it could be the lenses, anyway I don’t think they will survive long without some care when screwing in the lenses.

For the results of this iPad video test check out the video below.

I began researching Documentary methods and styles at the end of the second year at Uni as I knew this was something that I would be interested in developing for my BA 3rd year projects.

A list of books that I have read and/or purchased to help me develop my skills and knowledge as a Documentary Filmmaker.

All these books can be found in the AUCB Library but they are in demand so I purchased them for future reference.

Publication Date: 2 Aug 2010 | ISBN-10: 1408128586 | ISBN-13: 978-1408128589
More filmmakers are employed in making documentary films than any other genre. Thanks to the user-friendly equipment available today, it is no longer an area that requires a film-school background to get started. This book shows how you can begin making your first documentary movies – from researching and defining your theme, style, and the treatment that will drive your film, to organising the production and, ultimately, getting it seen by a wider audience. Following the simple practical advice, tips and easy steps in this book will get you started today. * Learn how to choose your subject and decide on your storytelling style * Create an outline/structure for your documentary and research and plan your material * Find out the essential equipment you will need to buy or rent in order to shoot and edit * Discover cinematic and editing skills to pull all your material together. * Understand how to budget and finance your project * Find out the logistics of shooting interviews, footage and other source materials * Create a trailer and get your work seen through festivals and publicity * Learn about the wider world of distribution.
Book 2: Film Directing Shot by Shot: Visualizing from Concept to Screen (Michael Wiese Productions). Author Steven D. Katz 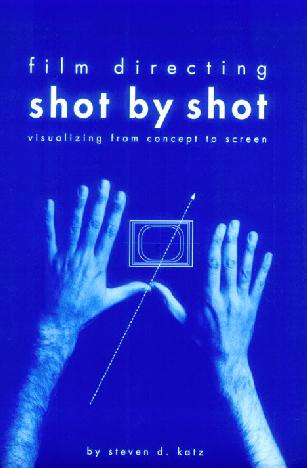 A complete catalogue of motion picture techniques for filmmakers. It concentrates on the ‘storytelling’ school of filmmaking, utilizing the work of the great stylists who established the versatile vocabulary of technique that has dominated the moviessince 1915. This graphic approach includes comparisons of style by interpreting a ‘model script’, created for the book, in storyboard form.

Publication Date: 1 Jan 2002 | ISBN-10: 0253214696 | ISBN-13: 978-0253214690
“Introduction to Documentary” provides a one-of-a-kind overview of the most important topics and issues in documentary history and criticism. Designed for students in any field that makes use of visual evidence and persuasive strategies, from the law to anthropology, and from history to journalism, this book spells out the distinguishing qualities of documentary. A wide-ranging and freewheeling form of film making, documentary has not yet received a proper, written introduction to its public, or its future makers.”Introduction to Documentary” is not organized as a history of the form although its examples span a century of film making. Instead, this book offers suggestive answers to basic issues that have stood at the center of all debate on documentary from its very beginnings to today. Each chapter takes up a distinct question from ‘How did documentary film making get started?’ to ‘Why are ethical issues central to documentary?’ These questions move through issues of ethics, form, modes, voice, history and politics, among others. A final chapter addresses the question of how to write about documentary in a clear, convincing manner. “Introduction to Documentary” provides the foundational key to further explorations in this exceptionally vital area of center making today.

Since it’s first edition in the mid 90’s, The Guerilla Film Makers Handbook has become THE DEFINITIVE handbook used and referred to by both emerging filmmakers and experienced filmmakers alike. It’s format is simple Q and A – the authors ask an expert in every field of film making process, from conception through to completion (and beyond), the ten questions any bright new film maker would ask if they had half an hour to chat over a coffee. And as the authors are three times feature filmmakers and veterans of the business, their questions are incisive, illuminating and to the point. There’s no film historian or lecture style discussion that could be irrelevant or distracting, just what a new filmmaker needs to know, how to do it, how long it will take, how much it will cost, the variables, and what pitfalls they should avoid. Augmenting the experts are the filmmakers case studies, where filmmakers explain just how they got their films made, what really happened (opposed to what the press said), and what they learned from their own journeys.

The book now contains over 150 expert interviews, runs for 768 pages and is near a million words of vital information. It’s lavishly illustrated from start to end, with diagrams, flow charts and photos. Industry expert interviews are contrasted by The Guerilla Film Makers Box Out Hot Tips, where the authors distil what it all means to the new film maker, and add their own money and time saving techniques. And of course HD and digital film making is now covered.

The authors also tell their story of how they made three low-budget feature films, worked with Oscar-nominated actors and Harrison Ford’s brother, received a royal audience at the Palace, became a target for Turkish terrorists and ended up in a police cell – yet lived to tell the tale!

My idea for the documentary is to work with BA Acting, following Ben cast as the central character during his final year at the AUCB. I also want to include as many of his fellow acting students in this project, as I can, as I feel this would add balance to the narrative. I’m hoping that there will be many strings to the narrative (stories within stories). For example character A is doing well but character B struggles with the character they are portraying.

These are just my initial ideas a documentary outline, as this is very much going to be an unscripted documentary (Fly on the Wall) I will not be able to exactly control every event, but these are the sort of scenes I hope to document.

1st meeting and videoing with the iPhone and iPad

I had no real success with using the iPhone or iPad as the venues lighting was 100% Fluorescent, which effected the video causing it to flicker – conflicting with the frame rate of these devices?. On this basis I decided the safe move was to stick with using my Canon 60D as the main camera and maybe use the iPad occasionally or as a backup when situations allow it.

I changed the DSLR frame rate to 24fps and the flickering was no longer apparent.

Audio has become something I am more aware of having had issues when videoing for the ‘Weymouth Bay’ documentary. The venue on the day is a Hall with no hangings or substantial furniture or indeed anything to absorb sound so I expected to get a flat echoing sound recording, which I did. I was also surprised that I could not pick up speech clearly even though I was using shotgun microphone. The sound appeared to be the same as if I’d used an omnidirectional microphone rather than directional, I put this down to the venue, which was bouncing the sound all around the Hall.

I’ve changed the footage to monochrome but leaving one colour as a feature (why? because I liked it)